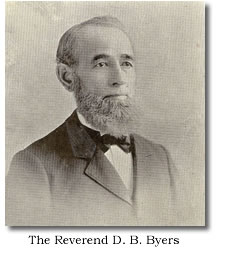 Sermon Preached by the Reverend D. B. Byers in Naperville, Illinois October 16, 1887 transcribed by James L. Gates, his Great-Great-Great-Grandson in Daphne, Alabama, February 21, 2007

“For I am persuaded, that neither death, nor life, nor angels, nor principalities, nor powers, nor things present, nor things to come, nor height, nor depth, nor any other creature, shall be able to separate us from the love of God, which is in Christ Jesus our Lord.” Romans 8:38-39 KJV

These words are the expression of earnest contemplation, of deep research, of thorough conviction, of masterly courage and triumphant Christian hope. While they fully grasp all possible peril to which the Christian soul may be exposed, they also discover the cleft of the Rock, the place of hiding above the reach and rage of peril, and the tried soul is formed to be “more than a conqueror through Him that loved her.”

Men standing for the first time before Mont Blanc, Niagara, or God’s autograph of granite in the Yosemite Valley 3000 feet high, do not feel like talking. The sight is overwhelming. The mind is rapt in inexpressible contemplation of these natural wonders. Awe fills the soul to its utmost capacity. Nothing can be thought of as adding to the grandeur of that which one beholds.

Such, in another field of God’s universe, is our text. It is one of those which in its grandeur and perfection leaves room for nothing to be added. It is sublimely, yes, divinely grand. Nothing can be added to its doctrine, its truth, its glory! We are carried by its contemplation, Mary-like at the feet of Jesus, into self-forgetfulness, wonder and adoration.

When we open the book of Nature, the first thing that attracts our attention is the power of God-omnipotence.

Like Moses before quaking Sinai, man fears and quakes before the awful storm-cloud. He trembles at the sight of a maddened ocean with its crested mountain-waves. He shrinks from the towering flame of the aurora borealis. The earthquake strikes him with inexpressible laws and providences make for righteousness and hope among all his intelligent creatures.

In the Gospel we learn that God is our Father in the best sense of the word. Compared with the mighty forces of nature about us, we sink into nothingness.

Bishop Jaynes said one of the severest trials of his faith he experienced on mid-ocean at seeing himself but a mere mote among the mighty elements, their sport, and utterly at their mercy.

The psalmist, gazing at the sidereal heavens exclaimed: “When I see thy heavens, the work of thy fingers, the moon and the stars which Thou has set in their place, what is a mortal that Thou bearest him in mind, or a son of Adam, that for him Thou shouldest care.

Moreover, measured by the rule of moral rectitude, man finds nothing in himself in which he can boast or trust. When conscience is suffered to speak, no language is capable of expressing it better than that of the Bible. “The heart of man is deceitful above all things, and desperately wicked; who can know it.” “I abhor myself and repent in dust and ashes.” “Behold I am vile, what shall I answer Thee? I will lay my hand upon my mouth.”

This is not a peculiar feeling or conviction, but matter of experience with all who see themselves in the light of infinite Purity. And yet, the Gospel encourages the morally deformed and ruined soul of man to think of God as a Father seeking a prodigal child, as giving his only son to redeem him, as loving him with an everlasting love.

It may at times, even in the soul of the believer require a struggle to bring the heart to a full and blessed realization of this fact. That God might love a pure angel or some celestial being whose thoughts, feelings, utterances or actions never knew touch or stain of sin, – that He might even love some conspicuous, fly-minded, talented, devout heavenly-spirited saint might be accepted; but that the Divine should love the human, the Infinite, – the finite, the pure the impure, and above all, as each one should know itself best, that God should love me, even me, what soul can fully grasp the thought and rest in its blessedness? Such realization is “joy unspeakable and full of glory!”

The Love of God in Christ Jesus our Lord is cognizant of all the variety and infinite number of our needs. The great burden of thought and labor among men in all ages has been food, raiment, and shelter. Addressing his disciples the Saviour remonstrates against the common anxiety: “The life is more than meat; the body is more than raiment.” That is, the life was not made for meat, but meat to sustain life; the body was not made for raiment, but raiment was made for the body; and he who ordained life and the body to exist, will not fail to provide the one and the other. For consider the ravens!

God feedest them, and how much more important are we than they? Consider the lilies – Solomon in all his glory was not arrayed like one of them: and if God so clothed the grass which is only for a day and then is no more, will he not clothe you who are made in his own image and made to live forever? Think, that even the very hairs of your head are all numbered. In this we have two lessons. The one is the grand truth of the unity of the universe. The universe is one. The Divine thought ordered it. The Divine sympathy touches everything that has life.

The Divine Providence has not failed to provide for all, even to the least that may be named in the universe. The second lesson is the logical conclusion from the universal Fatherhood of God and the unity of the universe. If God exercises care for vegetable life, it being the less in the scale of being, he will as certainly care for animal life; and if he feeds the raven and the sparrow whose life is comparatively little value, and allows the grass with more than royal beauty, it is impossible that he should fail to feed and clothe the crown and glory of the creation.

And so minute is the Divine concern for human well-being that God has placed his number on everything of any conceivable value, though but comparable to that of a hair of the head. So finite thought can follow the infinite care exercised toward his children by their Father in heaven.

Another fact of infinite interest is the constancy, almightiness eternity of the Divine love in Christ. In reference to all that earth and its inhabitants can be to us, it may be said in the words chiseled in a rock of Niagara: “All is change.” It is in the nature of that which is in part. Loves are often evanescent as the morning dew, and friendships as treacherous as the quicksand beds.

Even the love of a mother, though our ideal of human perfection in this respect is often exhausted and overborne by constant strain. All artificial motion must cease because the force upon which it depends becomes exhausted. All artificial lights will fade and vanish. But the motion of the ponderous orbs of our solar system is not known to have varied a second of time in 7000 years, nor the light of the sidereal suns to have dimmed from exhaustion through the lapse of incalculable ages.

There is a law and a power of attraction (All artificial attraction will relinquish its hold upon its object.) through which the relation order, harmony and glory of the sidereal universe has been preserved unmarred since the grand universal-Jubilee, “when the morning stars sang together, and all the sons of God shouted for joy.” So there is one Love which changes not and whose power is almightiness. There is one Heart whose beat ceases not and whose motion is the throb of Love – one Bosom whose embrace is felicity eternal.

The gift of Christ is the expression of Love infinite! In Christ the soul is brought fully under its attraction and power, to renew, purify, make meet for the inheritance of the saints, to preserve and protect against all powers unto the day of final redemption. “Who shall lay anything to the charge of God’s elect? It is God that justifieth. Who is he that condemneth? It is Christ that died, yea, rather that is risen again, who is even at the right hand of God, who also maketh intercession for us. Who shall separate us from the love of Christ? Shall tribulation, or distress, or persecution, or famine, or nakedness, or peril, or sword? Nay in all these things we are more than conquerors through him that loved us.

Nay, more, says St. Paul, I am persuaded – I have taken in the whole situation, all that is possible in “life,” however brief or however lengthened, with all that is possible in prosperity or adversity; I have investigated the character and methods of “death,” whether employs the thunderbolt as his instrument or lingering wasting disease, whether he come in the tumult of war or persecution, or in the quiet of home, whether his presence is heralded or disguised in the stealth of slumber; I have swept the field of time, past, “present,” or “future”; I have swept the “heights” the “depths” – the infinite of space, as with the inquiry of whether safe passage were above question to the house of the soul; I have made thorough inquiry into nature and habits of every other “creature” which might assail the redeemed who have fled for refuge to the love of God in Christ; I have thus faithfully, searchingly, earnestly looked into the face of every difficulty or peril which may beset the saint; but the love of God in Christ has triumphed over them all; the last doubt is swept away – “I am persuaded” it is not conquest only, it is abundant conquest – not victory only, but a grand, blessed and eternal triumph!

When the ship went down the third time into the yawning depths and bounded again in triumph to the top of the mountain wave, the captain, though not a Christian, exclaimed: “The Almighty did that!”

When a few years ago a daughter whose life was suspended upon a hair for a week, after her recovery thanked the Doctor for his faithfulness and skill, the Doctor responded: No thanks to me, but thanks to your Father through whose sleepless anxiety and tender nursing care you have been carried safely through the crisis of your sickness!

“I am a wonder to myself,” exclaimed a lone survivor of a Company in the Gettysburg carnage. “Every second carried my comrades from my side till the last one had fallen, yet here I am without scar or wound.”